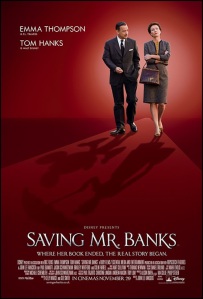 “Saving Mr. Banks” is a well-produced bore about a singularly unpleasant person.

Understand this: I love movies about assholes. Noah Baumbach’s “Greenberg” is one of my favorite films, and I consider Neil LaBute’s “Your Friends and Neighbors” to be a caustic masterpiece. But spending two dullish hours in the company of Mary Poppins’ noxious creator was almost more than I could handle.

Watching it, I was reminded of Roger Ebert’s final line in his review of Brian De Palma’s “Scarface.” He summed up that classic gangster film as “a wonderful portrait of a real louse.”

Well, “Saving Mr. Banks” gets the second half of that quote right.

This is actually two movies crammed into one. The first is set in 1961 and depicts the meeting between author P. L. Travers and filmmaker Walt Disney during pre-production for the adaptation of her beloved novel. The second storyline deals with Travers’ difficult childhood in dusty Australia. These sepia-toned flashbacks are so cliché-ridden, so lacking in honest emotion, so transparently manipulative, they make the animatronic Lincoln robot in Disneyland’s ‘Hall of Presidents’ seem like Daniel Day-Lewis.

Most of the blame lies with a script that mistakes hoary old chestnuts for psychological depth. Colin Farrell does what he can with the stereotypical ‘drunk dad’ role, but everything about the character is so overtly telegraphed it’s an uphill battle. The moment he coughs into a handkerchief, you just know it’s going to come away stained with blood.

Casting is problematic as well. The child-actress who plays the young P. L. Travers is simply not up to the task of portraying a complex human being at this stage in her career. She mostly just stands there, backlit, looking golden and angelic as the sun catches her curly hair just right. She’s little more than a prop, a semi-realistic doll that occasionally mumbles a corny line or two. Perhaps the filmmakers should’ve cut these sequences down to just a few fleeting images, instead of filling the movie with them.

The Disney half of the picture works better, but never quite catches fire. My main qualm is how repetitive it is. When we first meet Emma Thompson as Travers she’s complaining about selling her book to Hollywood. Two hours later, she’s still bitching about it.

The movie just keeps covering the same ground over and over again. While there’s some undeniable fun to be had in watching the birth of a classic like Disney’s “Mary Poppins,” the real-life Travers comes across as uniquely unsuitable for biopic treatment. She’s a one-note figure, almost exactly the same at the end of the story as she was at the beginning. Basically, she’s like Dustin Hoffman’s Rain Man… but not as lovable.

I guess we’re supposed to find her constant insults and cruel remarks “witty.” Instead, I just thought she was a bitter, humorless, nasty piece of work. There’s a pettiness to Travers that no amount of mildewed flashbacks can explain.

Tom Hanks lays on the folksy drawl pretty thick as the creator of Mickey Mouse. Personally, I had trouble believing that his Walt Disney could order his own lunch from the studio commissary, let alone run an empire.

I was surprised at what a small-scale movie this was. Most of the Australian sequences take place in a single drab farmhouse, while the bulk of the Disney scenes are set in one small rehearsal room. The whole thing felt oddly claustrophobic after about an hour.

I’m not exactly sure who the target audience for this is. Certainly not children, as I imagine they’d be bored to tears by it. And I have trouble picturing the modern teen who’d find it enthralling. Maybe it’ll resonate with adults who grew up loving the Poppins book and film, but I doubt it.

My advice for them would be to stick with the originals.