Pat Conroy’s ‘The Death of Santini’: A Book Review 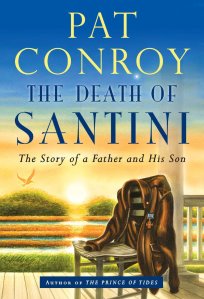 As a longtime fan of his purple-prosed fiction, it saddens me to admit that Pat Conroy’s “The Death of Santini” didn’t really work for me. When the book was first announced, I was a bit disappointed to learn that we were getting another memoir instead of a brand new novel. But the thought of Conroy peeling back the layers of his father’s violent personality still held some promise. At least that’s what I’d hoped for. After finishing it, I feel like Pat’s gone back to this autobiographical well once too often.

The opening chapters dealing with his father’s explosive anger and the cruel physical abuse he routinely meted out to his wife and children are the strongest by far. Conroy vividly paints the man as a hair-trigger tyrant who viciously terrorized his family at the drop of a hat. There’s a palpable horror to these early pages, a ‘you-are-there’ intensity that places the reader directly in the path of each oncoming punch. It’s shocking stuff, far worse than Conroy’s fictionalized account in his breakthrough novel “The Great Santini.” Eventually he segues into the making of the classic film starring Robert Duvall, and the strangeness of his life’s journey becomes sort of beautiful, in spite of the pain.

But then the book shifts gears dramatically and Conroy spends an inordinate amount of pages documenting the life of his maternal grandmother, ‘Stanny’, a woman who comes across more as a selfish alcoholic bore, prone to weirdly obnoxious sexual outbursts, rather than the ‘shining glory’ that Conroy repeatedly claims her to be. This is a woman who, during the Great Depression, literally orphaned her four helpless, poverty-stricken children to the care of her mentally deranged husband and took off for parts unknown. Conroy tries hard to forgive this unforgivable act of abandonment by explaining that years later, once she’d comfortably remarried, Stanny sent for her children to join her in Atlanta. But then he lets slip that she spent the rest of her life refusing to accept the legitimacy of three of those children, a wicked psychological injury from which they never fully recovered.

The fact that Conroy doesn’t dig deeper into what might have led his beloved grandmother to treat her babies so callously is one of the book’s most egregious failures. Conroy keeps introducing stunning personal details and then refuses to follow up on them with any depth. A similar thing happens at the end of the Stanny chapters, where Conroy casually admits that, although he supposedly adored her beyond words, he nevertheless abandoned his grandmother to a nursing home, despite her literally begging him not to. Once again, he doesn’t attempt to explain what led him to make such a painful decision. He simply chalks it up to a personal failure and moves on to another topic.

And that’s my biggest problem with the book. As a memoirist, Conroy seems either unwilling or unable to rigorously examine what lies beneath the psychological surface of his admittedly fucked up family. There’s a disappointing shallowness at work here, a fear of truly digging deep into what makes these people do the things they do. Conroy seems comfortable describing each violent blow that struck him and his siblings down, but those are still just surface details. When it comes to his dark inner life, the messy stuff that each of us carries around inside, he’s far too reticent. That hesitation makes for a dull memoir, in my opinion.

And then there’s the actual writing, which again left me underwhelmed. I’ve always enjoyed Conroy’s overly descriptive prose style, especially in his lovely novel “The Prince of Tides.” The guy never met a lily that didn’t need gilding, and that’s part of the fun of reading him. I suppose it’s in keeping with the Southern literary tradition he embraces. Unfortunately, it doesn’t serve him well here. Far too often, he trips over a string of adjectives, mixes gaudy metaphors and oddly enough seems intent on calling virtually every woman in the book “pretty.” Over and over again he uses that meaningless word to describe his female friends, aunts, wives and editors. It’s almost comical at times, especially when he starts using it to describe their homes and furniture, too.

Finally, as a memoirist Conroy has a bad habit of making overly simplistic snap decisions about the people and places he encounters throughout his life. Time and again, he’ll introduce someone and claim that he fell instantly in love with them (or hated them) the very first second they met. It’s a lame psychological shortcut that robs his observations of nuance and depth, rendering everything in dull black and white.

By the end of this well-intentioned but meandering book, I’d grown tired of the troubled Conroy clan and their near-constant dysfunction. As fascinating as they may be, I think they probably work best when translated into fiction.

Tags: Pat Conroy, The Death of Santini, The Great Santini